Francis Schaeffer could also be explored as a case study in the crippling evangelical weakness for spiritual celebrities.

These organizations depend on popular support so they must project favorable public images of themselves. This typically involves lionization of the founder, which usually traces back to the founder’s own self-promotion.

Ever since George Whitefield crafted the public persona that made him the first true celebrity of the British North American colonies, American evangelical entrepreneurs have followed his lead.

Schaeffer was no exception.

He created and maintained the public persona of a countercultural sage come down from the mountain with a new word of wisdom from the Lord. 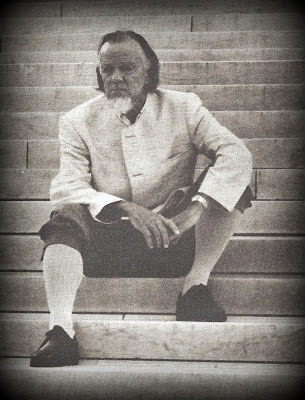 Such a mythic image could only be sustained through the art of illusion.

This began with his costume.

I copied the above paragraph from an article published in the Evangelical Studies Bulletin Issue #70 (Winter 2008-09).

I found the photo of  Schaeffer in his co-authored book, Whatever Happened to the Human Race.  When I heard him speak in 1979 or '80, he was dressed as pictured.

Bonus link about judging the book by its cover.


Postscript ~
I *like* Francis Schaeffer and do not mean to disparage his reputation by sharing Michael Hamilton's insightful review of two Schaeffer biographies.

Post-postscript added 3/10/15
Link to article about celebrity pastors
Posted by Dana in Georgia at 8:06 AM